An overview and notes on some common lockpicking tools and techniques.

This is what a common lock pick set looks like.  It consists of RAKES such as the Ball, Half Ball and Multi-Diamond designs.  These are used when raking a lock.  FEELER PICKS come in two shapes, Half Hook and Full Hook.  These picks are designed to lift one pin at a time.  TENSION WRENCH a small level-shaped metal bars used to turn the cylinder in a lock.  They are vital to lockpicking.

One of the better locking picking manuals available is the MIT Lockpicking Guide.  Print it out and study it. 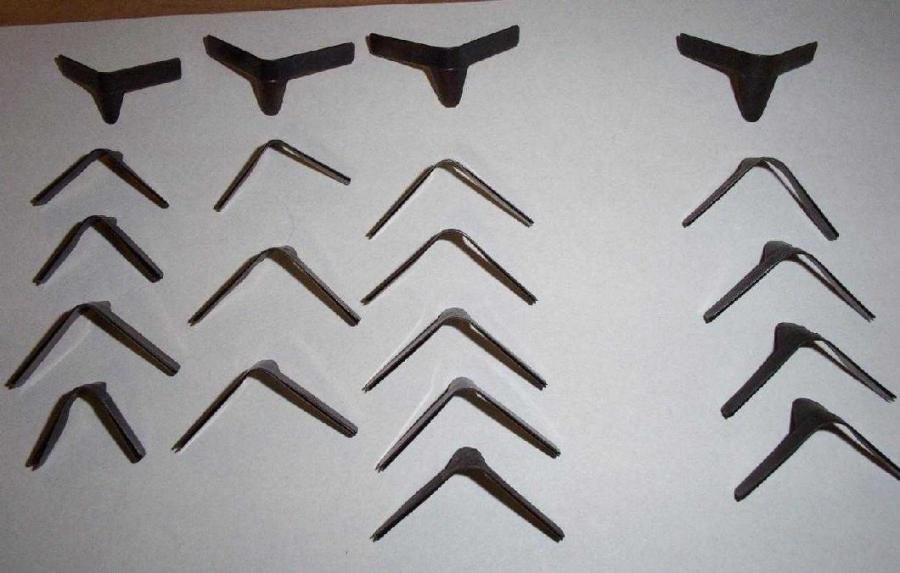 These are clever little metal shims to slide down into the latch on a padlock.  They do work, but will become damaged after a few uses.

The shims are designed for use on padlocks with spring operated latch(es).  Generally, they are more effective on the cheaper type of padlocks.  The more expensive locks tend to be made to better specifications and are therefor more resistant to opening with any shims.

For these shims to be effective, there must be sufficient clearance between the shackle diameter and the holes in the padlock body to enable the shims to be inserted.

On single latch padlocks, any slack in the pivot side will help if the clearance is minimal.

These shims have been manufactured from the highest quality carbon spring steel to give more durability and longer life.  Sometimes a shim or pair of shims will open several locks, whereas, occasionally with the better made locks, it may become necessary to try another new shim if it becomes damaged.

For most padlocks, the latched leg of the shackle is generally on the same side as the serrations of the key.  Choose a shim having the same or slightly larger bend radius than the shackle diameter.

A slightly larger radius will close down to the correct shape more accurately than an undersized one will open up.  It may also be necessary to shorten the length of the arms before using a shim on smaller padlocks.

Use the same procedure as for the single latch, but when the first shim is positioned, exert pressure on the outside of the pivot side of the shackle and ease another shim into the clearance.  Again, twist and push the shim down into the gap until it is fully down.  Then rotate this shim around the shackle until the wings are pointing outwards.  With the better padlocks, it is this last maneuver that is difficult or even impossible.  However, once both shims are down and rotated outwards, it is probable that the padlock can be pulled or easily forced open.

One some types of padlocks with weak latch springs, it may be possible to force the shim down onto the latch(es) directly from above, and ease it (them) back.  However, if this technique is used on a latch with strong springs, the tip of the shim could bend and the latch would not be pushed back far enough to release the shackle.

Picture overview of a shim on a Master combination padlock

Though highly overrated (you can pick most locks with just a feeler pick and a tension wrench), mechanical lockpicking guns do actually work.  With a little practice, you can open some locks in seconds.  The lockpick gun also requires the use of a tension tool for turning the lock’s cylinder.

Use of the Tension Tool

Working the Trigger of Tool

Here is simple trick you can use to apply the right amount of tension on a cylinder while trying to pick a lock.  It involves drilling several 1/16″ holes in the handle of a tension wrench to allow the hanging of some lead fishing sinkers.  The sinker’s eyelet need to be modified slightly by clipping one side to form a hook.  Be sure to use high quality drill bits when drilling the tension wrench hole