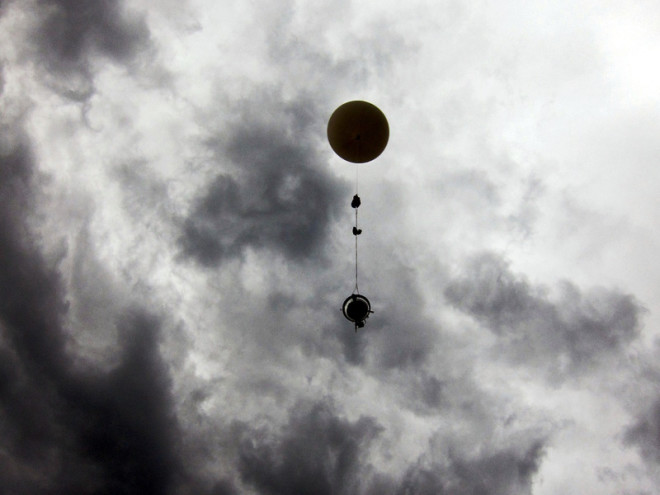 FOR GOVERNMENTS SEEKING to hide controversial programs from their citizens, there are few better directions to transmit secret military and espionage communications than straight up. Unlike here on earth, no pesky amateur radio eavesdroppers or curious hackers monitor the open sky between ground control and a drone—not to mention between that drone and its communication satellite perched miles higher up.

One small crew of hackers is trying to pierce that stratospheric secrecy zone with a high-altitude flying—or at least floating—machine of their own. The three members of a socially motivated movement of technologists known as Critical Engineering have developed and begun testing an “aerospace probe” they call the Deep Sweep. The invention, described in their own detailed writeup, is a 1-foot-diameter acrylic orb packed with radio equipment and attached to a 8.2-foot diameter helium-filled weather balloon. As it floats up more than 15 miles into the earth’s atmosphere, the probe’s antennae are designed to record a wide range of radio data to be analyzed when the probe is recovered hours or days later. The project’s goal: to pioneer a new form of public, crowd-sourced data collection for tracking the communications of a secret layer of government sky machines—drones, satellites and high-altitude planes.

“The core point of the project is to build a low-cost platform for high-altitude signals intelligence for the rest of us,” says Julian Oliver, a Berlin-based artist and hacker who launched the project along with fellow creators Bengt Sjöle and Danja Vasiliev. “It’s about creating an interface to read the signals in the skies above us, to understand what’s going on up there.”

The Deep Sweep launches 1 and 2 from CriticalEngineeringon Vimeo.

The group’s DIY probe was built with three software defined radios, three antennae all listening to different parts of the radio frequency spectrum, a Gopro camera, a GPS module, temperature and pressure sensors, a SIM card for communicating with the team via SMS, and an insulated battery. All of that is integrated with an Arduino board, a USB hub, an Intel Edison minicomputer and open-source software. The cheap design is intended to encourage other amateurs to build high-flying probes of their own: Oliver says the entire setup cost less than $300—though they hope use even cheaper components in future versions—with another $200 for the balloon plus the helium to fill it.

As a final touch, the team constructed the orb’s shell from a pair of parabolic mirrored surveillance camera covers—the kind used on the ceilings of retail stores and banks. “We thought that suited the project very nicely,” Oliver says.

So far, the Critical Engineers have staged two test-launches of their spy balloon. Here’s how it works: When the probe rises to an altitude of around 17 or 18 miles, reduced atmospheric air pressure causes the balloon carrying it to burst (after expanding to nearly 10 times its original volume.) Then the probe releases a nylon parachute and floats safely back to earth. Once it’s back in cell tower range, it sends a text message to its creators signaling its arrival and sharing its landing location.

The tests had mixed results. Its first balloon flight from the eastern German city Frankfurt am Oder in August landed in a Polish field. When they tracked down and recovered the device after a long, pre-dawn drive, they found that its power source had failed just seven minutes into the flight, cutting short its data collection.

Their second launch later the same month was more fruitful, despite a different set of problems: They released the balloon from Magdeburg, Germany, expecting that it would again land in Poland. Instead, during a long period when the probe lost cell signal, the wind pulled it more more than 600 miles east, at some points dragging it through the sky as fast as 87 miles an hour. “It was a bit of a desperate feeling,” says Oliver. “You get quite attached to the thing. When we finally got an SMS from it the following morning, we were pretty happy people.”

The probe had landed in a cornfield near Minsk, Belarus. Since Belarus’s dictatorship doesn’t keep an open border with the EU, the team had to enlist the help of a friend with Belarusian contacts to rescue it. Despite their initial suspicions that the shiny sphere’s creators were state spies rather than amateur hackers, a Belarusian couple eventually retrieved the probe and offloaded its data over the Internet to Critical Engineering’s server in Sweden. (One of the two Belarusians traveled this month to Stockholm via a ferry from Estonia to deliver the probe back to its owners.)

The data from that first successful test-flight, available for download here and built into a set of data visualizations here, is intended to be the start of a public, crowdsourced collection. Oliver says the group plans to create a wiki for publishing the results of any future probe launches, both those by his Critical Engineering team and anyone else who launches a stratospheric radio balloon of their own.

And just what do Deep Sweep’s creators think they’ll find in their probe project’s potential trove of radio data? Oliver says they hope to pick up threads of conversation between government agencies and flying machines that range from Predator and Reaper drones to stringray-toting surveillance planes to spy satellites like those launched by the U.S.’s secretive National Reconnaissance Office. Those radio conversations are no doubt encrypted, and Oliver says the group has no illusions that they’ll be able to peer into the content of the communications. But they do hope they’ll eventually be able to at least recognize the presence of secret sky devices talking to the ground or satellites overhead, and even possibly learn to “fingerprint” and distinguish them.

Oliver hopes that the Deep Sweep project might be the beginning of a new amateur community of high-altitude radio enthusiasts who monitor the radio frequencies of the skyscape the same way that Ham radio hobbyists have monitored and transmitted ground-based communications for decades.

“What the Ham radio scene does here on earth…we want to do the same thing at the edge of space. Because that’s where a hell of a lot of really interesting and dubious things are happening,” says Oliver. “There’s no other way of getting to the bottom of it all than by getting up there.”

Source: Hackers Launch Balloon Probe Into the Stratosphere to Spy on Drones | WIRED